Minneapolis 2040 went into effect on January 1, 2020, following over two years of engagement with the people of Minneapolis. The plan guides growth and change with fourteen goals in mind, including eliminating racial disparities, slowing climate change, and increasing access to jobs and housing.

As required by state law, the City is beginning to change its zoning rules to match the development guidelines that the City Council already approved with Minneapolis 2040. This technical process will take several years and will include updating the zoning classification of every property in the city to match Minneapolis 2040.

The first set of zoning changes will focus on technical aspects of built form standards that will regulate the scale of new buildings and additions throughout Minneapolis. This web site provides information about the draft built form regulations, including an opportunity for public comment. The City Planning Commission and City Council are expected to vote on approval of these changes by the end of 2020. Online public meetings will be held in early fall.

April 2016 - December 2018
Over two years of engagement on Minneapolis 2040
December 7, 2018
The City Council approved Minneapolis 2040
January 1, 2020
Minneapolis 2040 went into effect, along with initial zoning changes allowing up to three units on all residential properties and requiring a percentage of affordable housing units in new apartment buildings.

September 3, 2020
The public comment period begins, with opportunities to review and comment on the draft built form regulations via this web site as well as three virtual meetings hosted by City staff.
September 23, 2020
Virtual meeting #1 at 5pm-6pm

September 29, 2020
Virtual meeting #2 at 5pm-6pm
October 7, 2020
Virtual meeting #3 at 3pm-4pm (Focused on Downtown)
October 19, 2020
The public comment period closes with a public hearing before the City Planning Commission, which will vote on forwarding a recommendation to the City Council.
November 20, 2020
The City Council will vote on approving the draft built form regulations.

While all the goals are important, Minneapolis 2040 is centered on eliminating racial disparities. To achieve this goal, the City of Minneapolis will work to undo the legacy that remains from racially discriminatory housing policies by increasing access to opportunity through a greater diversity of housing types, especially in areas that lack housing options as a result of discriminatory housing policy. Implementing the Built Form Map through zoning districts makes it legal to build the greater diversity of housing types called for in Minneapolis 2040, and will work in concert with the City’s larger housing strategy to increase housing choice and affordability.

The Land Use and Built Form section of Minneapolis 2040 describes where new housing, workplaces, and retail establishments may locate in the city in order to achieve the plan goals. This guidance is communicated through a combination of policies and maps. The first two policies of the plan, Access to Housing and Access to Employment, are the most relevant to the adopted Built Form Map that guides the location and characteristics of new buildings.

The Access to Housing policy outlines the role of the Built Form map in increasing housing choice throughout the city, acknowledging the contribution of zoning to racially-restrictive housing practices of the first half of the 20th century, and the lasting effect those actions had on people of color and indigenous people. The policy also reinforces the practice of developing multifamily housing on transit routes, providing people the opportunity to live without a car, or with fewer cars in each household, helping to work toward the City's greenhouse gas reduction goal. This policy ensures that we have places throughout the city to increase housing supply and choice.

The Access to Employment policy outlines the role of the Built Form map in supporting employment growth and ensuring that land is available for living-wage jobs in areas close to where people live, including access to living-wage jobs.

The draft built form regulations will resolve some of the major conflicts between Minneapolis 2040 and the City’s current zoning regulations. They are also intended to provide more predictability for the scale of new buildings and additions, which will help achieve the Minneapolis 2040 goals.

Minneapolis 2040 includes 14 Built Form Districts that guide the development of these draft regulations, which govern issues such as building height, floor area ratio (FAR), lot sizes and setbacks from property lines, among other things. The draft zoning changes described here enact new overlay districts that contain built form regulations in accordance with the built form maps and policy guidance that was already adopted by the City Council in Minneapolis 2040.

Important note: Not every property in the city will be redeveloped between now and 2040. These regulations will provide guidance if a property owner proposes changes to an existing building or proposes to construct a new building 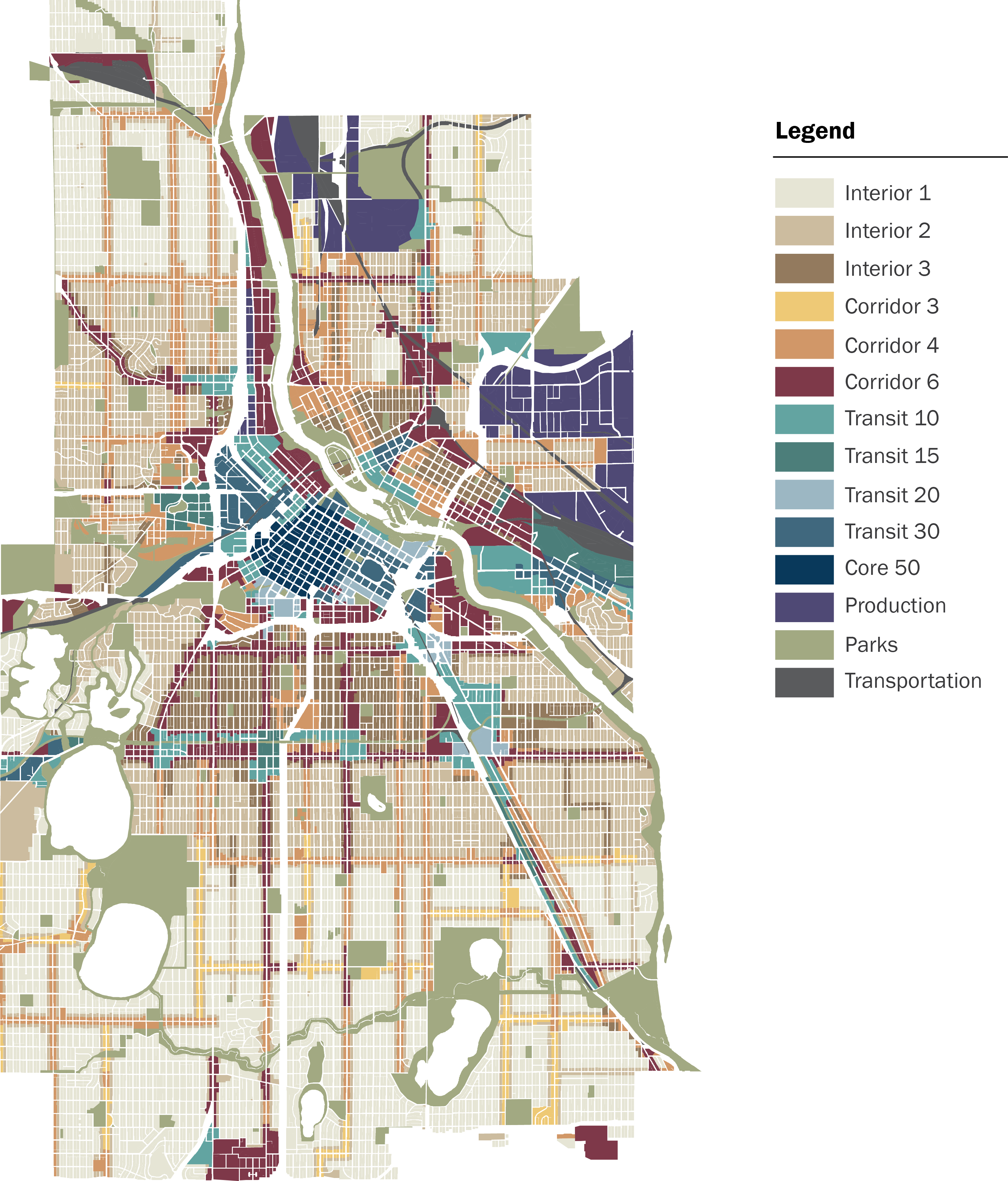 The draft built form regulations are summarized below.

You can also find all the draft recommendations and additional technical information on the City's Zoning Code Text Amendments page.

The Built Form Overlay District Map will become part of the City’s zoning ordinance. This map matches the Future Built Form Map already approved by the City Council in Minneapolis 2040. It also includes additional districts near the Mississippi River that were adopted as part of the Mississippi River Corridor Critical Area Plan. Clicking on a district in the map will take you to a summary of the draft built form regulations for that district.

Feedback can be submitted below or at any of the virtual meetings that will be held later this month.

Sign up below to get reminders about upcoming events.