The Land Use Rezoning Study draft recommendations are available for public review starting January 12, 2023. A public hearing to consider recommendations is scheduled for March 20, 2023. Visit the project website for more information.

What is a comprehensive plan?

Minneapolis 2040, the City’s draft comprehensive plan, will guide City decision-making for the next 10 years, with an eye toward the year 2040. After 10 years, the City will update the plan again in accordance with state statute. 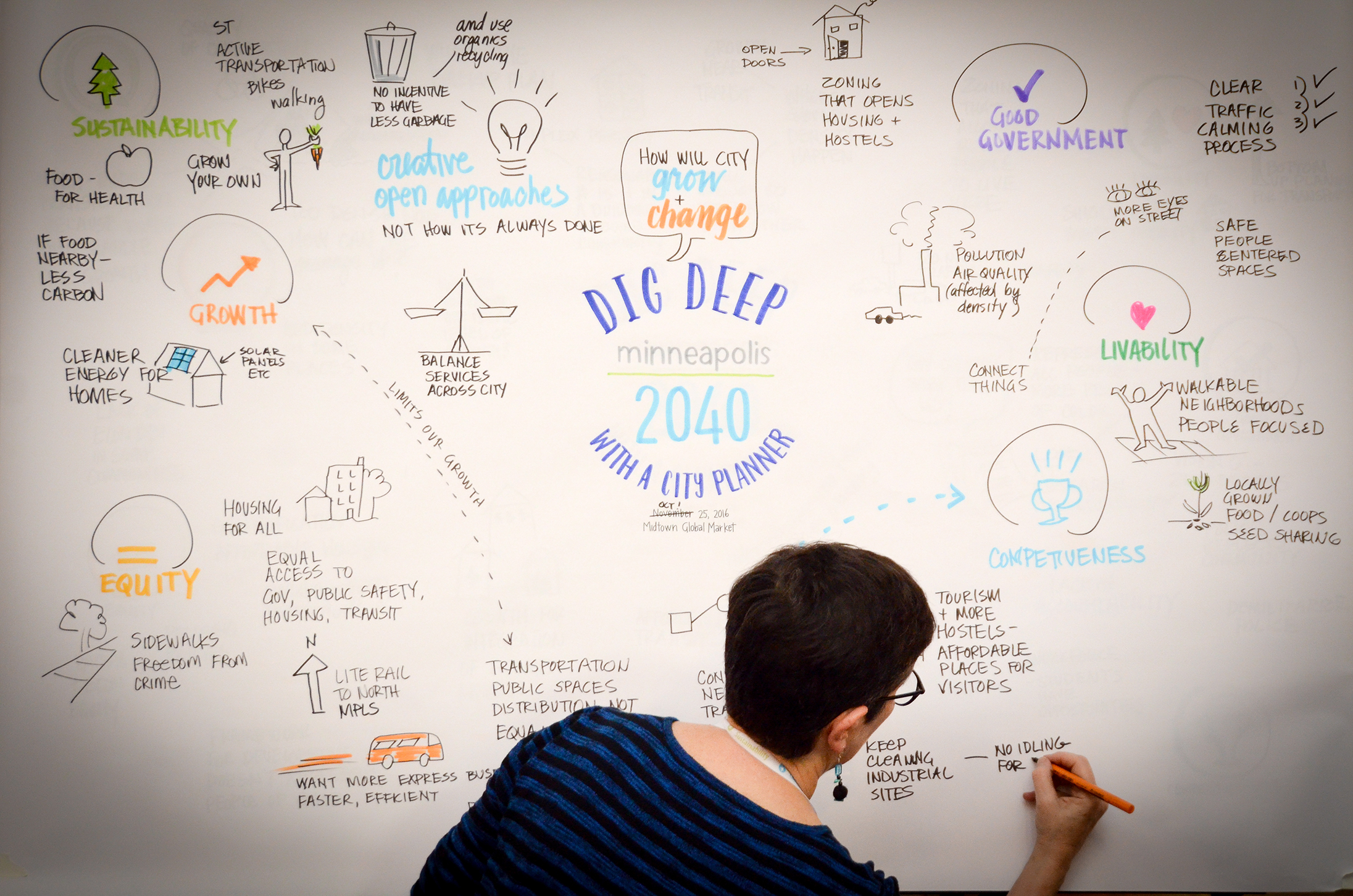 Minneapolis 2040 is a set of interconnected policy ideas that the community lifted up during the more than two year engagement process. These community ideas helped the City establish priorities and will guide how our city develops over the next 20 years. The document includes 14 goals adopted by the City Council in 2017 that articulate the plan’s intent with an overarching theme: Minneapolis’ growth must be managed so the city works for everyone and existing disparities between white people and people of color are eliminated.

The plan features 100 policies with action steps outlining ways to achieve the goals. It also features topics, which sorts the draft policies into 11 subject areas, and land use and built form maps.

What are the key goals outlined in Minneapolis 2040?

The Minneapolis City Council adopted 14 goals at the beginning of the process using feedback from the public. The goals are intended to state the plan’s intent as clearly as possible.

What is the timeline for Minneapolis 2040?

The revised draft of the 2040 Comprehensive Plan was released in Fall 2018 for consideration by the Planning Commission and City Council.

How much community engagement has there been?

The final draft of the plan is the product of a thoughtful effort spanning more than two years to meet with the people across the city. It integrates more than 18,000 public comments collected during the community engagement process. Engagement activities have included community workshops, community dialogues, street festivals, artist-designed engagement and online engagement. This feedback made this plan stronger and more reflective of our community’s values. You can learn about the engagement process at the planning process section of the website.

How will the City use the comprehensive plan?

Minneapolis 2040 will guide future growth for the city. It is not an instruction book, but rather a tool to frame our growth, set direction, and give high-level guidance. This plan will be used to inform future ordinances, zoning code revisions, and our strategic racial equity plan, among other items.

Does Minneapolis 2040 call for the end of single-family homes?

Minneapolis 2040 does not call for the end of single-family homes. The Built Form Map in the draft plan guides the scale of development in every parcel of the city. It includes 14 districts.

The districts range from areas that allow small-scale residential structures with one to three dwelling units on a traditional city lot up to the downtown business district that allows for the tallest buildings in the city.

Can the City demolish existing homes?

How does Minneapolis 2040 address housing affordability?

Minneapolis is growing faster than it has since 1950. The Metropolitan Council estimates that between 2010 and 2016 the city added over 12,000 housing units and more than 37,000 residents. With this growth comes increased demand for housing and an associated increase in housing costs and rents. As a result, housing units that were once affordable no longer are, and less housing is available for low-income residents of Minneapolis.

Minneapolis 2040 calls for allowing more housing options, especially in areas that lack housing choices and access to transit, jobs and goods and services. Proposed policies also call for creating and expanding resources to produce and preserve affordable housing and minimizing the displacement of residents.

The disparities that exist today are the result of overt and institutionalized racism that has shaped the opportunities available to multiple generations of Minneapolis residents.

To achieve the goal of reduced disparities, Minneapolis 2040 proposes increasing access to opportunity through a greater diversity of housing types, especially in areas that lack housing options as a result of discriminatory housing policy.

The City will invest in education, skills training, small business support and other support systems to help residents access opportunities to gain and retain well-paying employment that allows them to grow as individuals. Additionally, the City will lead by example, hiring and training a diverse workforce, as well as promoting these practices through its contracts, vendors and other procurement and partnership opportunities. There are 35 proposed policies tied to goal of reducing racial disparities.

When will the policies in Minneapolis 2040 take effect?

Minneapolis 2040 policies and action steps will take effect January 1, 2020. This follows completion of Metropolitan Council review and approval, and the City Council and Mayor's action to finalize the document in October 2019. Until January 1, 2020, the City's current comprehensive plan will be referenced for questions regarding such things as proposed development and future land use.