Public Safety Through Environmental Design: Use design principles that ensure a safe and welcoming environment when designing all projects that impact the public realm, including open spaces and parks, on publicly-owned and private land. 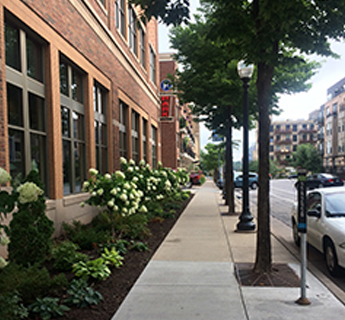 Crime Prevention Through Environmental Design (CPTED) is a commonly-used term for designing the built environment to contribute to a sense of safety. The four elements of CPTED are: natural surveillance and visibility; lighting; territorial reinforcement and space delineation, and natural access control. The City of Minneapolis requires all new development to be designed using CPTED principles and encourages the renovation of existing development to conform to CPTED principles. This includes development projects that are both publicly and privately owned as well as those that impact the public realm such as open spaces and parks.

A common best practice of CPTED orients buildings, entrances, and circulation or movement patterns to the street to function as “eyes” that watch over street activity. The success in this approach often lies in the kind of activity that looks out over the street. For example, small scale neighborhood commercial uses located up to the sidewalk provide the most vigilant and alert security force available; owners and tenants have a vested interest in watching over their immediate surroundings. The daily presence of a manager, owner, or tenant brings the stability and security of commercial activity to a neighborhood. Stores or services can turn isolated areas into hubs for local neighborhood residents.

Features of CPTED building design include incorporating lighting strategically into site and structure design, providing unobstructed views across the property and to and from the public realm, and unobstructed windows for visual surveillance. Expanses of blank walls are avoided and parking is placed behind the building, so as not separate the building from the street.

The City will seek to accomplish the following action steps to use design principles that ensure a safe and welcoming environment when designing all projects that impact the public realm, including open spaces and parks, on publicly-owned and private land.